← Wind Farm Maintenance
Mục lục ẩn
1 What is wind energy? And why is it important?
2 The Basic Components of a Wind Turbine
2.1 TOWER
2.2 NACELLE
2.3 ROTOR AND ROTOR BLADES
2.4 OTHER ELECTRONIC EQUIPMENT AND COMPONENTS
3 Site Preparation
4 Construction Process of Wind Turbines
4.1 STEP 1: THE TOWER IS CONSTRUCTED
4.2 STEP 2: THE FIBREGLASS NACELLE IS INSTALLED
4.3 STEP 3: THE BLADES ARE BOLTED TO THE NACELLE
5 QUALITY CONTROL

We usually only see a wind turbine’s final erected look when passing through them near highways, countrysides, or on rare occasions on the shorelines. Despite their vast size, wind turbines seem relatively straightforward and fairly uncomplicated.

However, there is a long, tedious process behind constructing a wind turbine, including the challenges of handling huge complex parts such as the rotor blades.

This article will take you through the process from zero to a full set upwind turbine. If you ever wondered how does a wind turbine is constructed in simple terms, read along, you are in the right place.

What is wind energy? And why is it important?

Wind energy is rising worldwide as more innovative products and ever-decreasing costs serve to make it more feasible and sustainable. The wind turbine is a system that transforms the wind’s kinetic energy into rotational mechanical energy, which is then used to operate in a specific work. In more advanced versions, rotary energy is transformed into electricity, the most reliable energy source, through a generator.

The Basic Components of a Wind Turbine

It is either a steel tubular tower with an inner ladder leading to a nacelle or a steel lattice tower roughly comparable to an electrical tower. The tower must be designed to absorb the heavy static loads applied due to the wind’s varying strength.

The nacelle is solid, and a hollow shell containing the inner workings of the wind turbine. The nacelle is typically made of fiberglass and comprises the main drive shaft and the gearbox. All turbine machines are kept in the nacelle. It rotates in the direction of the wind and is connected by bearings to the tower. The gearbox is used to convert rotor movements of 18-50 rpm to approximately 1500 rpm as needed by the generator.

The rotor and the rotor blades convert wind energy into rotational mechanical movement. The three-blade horizontal axis rotor is presently the most common. The rotor blades are primarily made of reinforced carbon-fibre plastics or glass fibre. The design of the blade is exceptionally similar to that of the aeroplane wing.

OTHER ELECTRONIC EQUIPMENT AND COMPONENTS

Before any consideration can be made, the construction of individual wind turbines from the manufacturers must decide the appropriate area for installing wind farms.

That means that the winds must be reliable. Their speed must be more than 15.5 miles per hour daily (25 kilometers per hour) – Supposing that the winds are heavier during those seasons.

Another consideration that needs to be prepared for is the rise of temperature from heat, where heating increases electrical power consumption.

Wind farms operate best in open areas with gently rolling land surrounded by mountains. These areas are chosen because wind turbines can be installed on ridges and remain unobstructed by trees and buildings.

Additionally, because wind turbines have many environmental advantages, we usually assume that having them sitting on a wind farm would not be an issue. Unfortunately, this is not the case. With every electrical power plant project, the proposed wind project must undergo a site review process to obtain permits and approvals before construction and operation.

Eventually, when a wind turbine is built; the roads are cut to make way for parts to be transported. At each location of the wind turbine, the land is graded, and the pad area leveled. A concrete base is then placed on the site, preceded by the installation of underground cables. These cables link the wind turbines in series and connect them to the remote control center where the wind farm is controlled. The energy is sent to the power company.

STEP 1: THE TOWER IS CONSTRUCTED

Steel parts of the tower may be manufactured off-site in a factory, but they are typically installed on-site. The pieces are bolted together, and the tower is held in a horizontal position before it is placed. The tower is lifted by a crane, the bolts are tightened, and stability is checked upon completion.

STEP 2: THE FIBREGLASS NACELLE IS INSTALLED

STEP 3: THE BLADES ARE BOLTED TO THE NACELLE

Typically, the three-branched blade has two blades on the nacelle before it is elevated. After the nacelle is in position, the third blade is bolted. The electrical communication system and the utility box for the wind turbine are installed along with the nacelle and blades.

Wind turbines usually undergo routine check-ups and maintenance to reduce failures. Typically, there is an inspection every few months; ideally, every three months and maintenance checks are required every six months. Any moving component would be lubricated, and the oil level in the gearbox is checked. 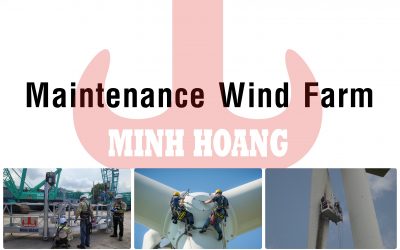 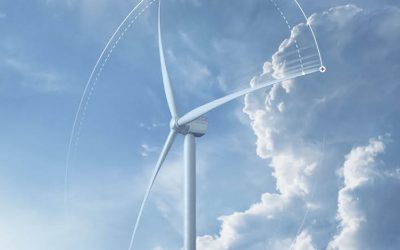